Reconstruction and a New Name

In 1966 a reconstruction of the parent company PYE took place when the Dutch-based Philips organisation bought the company. However, this wasn’t to have much direct effect on the New Zealand company until 1979-80 when Philips also took over the New Zealand operation of PYE.

Photo: The PYE factory building on Moresby Avenue after the 1980 Philips take over. 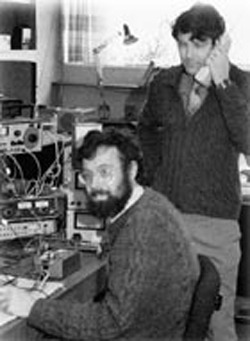 Photo: Alan Purvis (seated) and Newton Spargo just prior to closure in 1986. Both men still work at the old Pye buildings, managing their own companies.

1974 saw the commencement of colour television production.
This reached a peak very quickly in 1975.

With the takeover by Philips and their subsequent rationalisation of activities, 1981 saw the closure of the Paeroa factories and the staff and work shifted to Waihi.

Television production was shifted to Naenae in Wellington and all audio to Waihi. Then, because of major difficulties throughout the electronics industry in 1982-83, over 200 people from a total staff of almost 550 amongst the Waihi factories and the subsidiary Hamilton factories, were laid off in early 1983. In late 1983 the Hamilton factories were closed, the operations shifted back to Waihi, the plant manager, Mr R. Evans, appointed and the gradual climb back to a secure market was begun.

Staff morale was slowly but surely raised by a diligent management approach. Maintaining a policy of quality and flexibility and working closely with the Philips New Zealand Limited Commercial Divisions, the Waihi Plant continued manufacturing and assembling a wide range of products. These included home audio and in-car entertainment under the Philips and Pye brand names, coffee makers, irons and toasters, telephones and ancillary equipment for the Post Office and professional products for the Philips Electro Acoustic Division.

1958: Development and production of first single cabinet stereogram. First use of printed circuits in New Zealand.

1963: Opening of Barry Road research and development laboratory. Opening of own building in Paeroa.

1964: Staff peak at over 500 in production of black and white television. Paeroa factory gutted by fire and rebuilt. Opening of Paeroa record pressing plant.

1984: Sees the beginning of climb back to full production. Introduction of non-audio lines.