Rudolf (known as Barry) was the third of the six children of Christoph Rudolf Friedrich Pfundt (born Wurttemberg, Germany) and Isabel Pfundt (known as Gabel) nee Barry. Rudolph’s occupation was merchant’s clerk for the Colonial and Foreign Merchant. The family lived in a house called Rollodene at 13 Birdhurst Road., Croydon, Surrey, England. The London Gazette, March 1915, records that Christoph Rudolf Friedrich Pfundt took the oath of allegiance on 18th February 1915.

Barry Pfundt, born 30 August 1887, was educated in his home town of Croydon, Surrey. The Surrey Mirror and County Post, 1903, listed Cambridge examination results and R B P Pfundt of Elmhurst School, satisfied the examiner. Sometime around 1904 when aged 17, he decided to travel to New Zealand. The Waihi Gold Mining Company (WGMC) Time and Wage books located at the Waihi Museum, record Pfundt, B. employed for about one year from 8th September 1906, occupation: youth.

In 1908 Pfundt sat and passed a land and mining surveying examination at the Waihi School of Mines. And in June that year, was part of the Waikino Association Football team that played an Auckland Representative Team at Eden Park. He also belonged to the Waihi Rifles that disbanded in 1911. 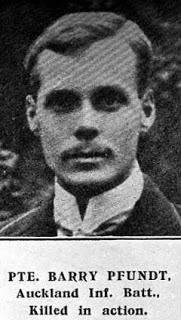 Barry Pfundt enlisted in the Auckland Infantry Regiment 6th Hauraki Coy at Cambridge, New Zealand on 25th November 1914 when working at the Hora Hora power station for the WGMC as a mechanical and electrical engineer. Hora Hora’s construction commenced 1910 and completed in 1913.

Pfundt’s WW1 history on archivesnz is short on detail, possibly because he was killed in action on 25th April 1915. His attestation paper records his single status, that he was inoculated against typhoid, embarked for the Dardanelles on 12th April 1915 and finally, transferred as driver, 3rd April 1915. Just 12 days later he was reported missing at the Dardanelles and believed dead. A Board of Inquiry held 16th January 1916, declared Rudolf Barry Paul Pfundt killed in action on 25th April 1915. His 1914-15 Star, British War medal and Victory medal were sent to his father in Croydon, Surrey.

While researching the history of Private Barry Pfundt it appeared that he had two army serial numbers, 2/1765A and 12/1765.

An enquiry to the National Army Museum archivist at Waiouru, New Zealand produced this explanation:

The letter a/A was normally assigned when a clerical error had been made and two soldiers were assigned the same service number. This error occurred on one Private Pfundt’s forms (Army Form B.103 - Casualty Form).where by the service number 2/1765 was used. The number ‘2/1765’ was also the service number for a Gunner Ronald Esmond Cudden (incorrectly spelt on Archives New Zealand as Cuddon) who was in the New Zealand Artillery.