A total of 706 officers, nurses and men, most of them invalided, will return to New Zealand by three vessels due within the next few weeks…… Draft no 176 included F. A. Fugill.
Ref: New Zealand Herald, 2 October 1918.

Sometime after 1891 when Francis was born, and before 1893 when second son, Sydney was born, the family moved to New Zealand. According to the 1896 electoral roll they lived at Karangahake, near Waihi where George was a miner. George and Mary returned to Australia prior to 1899 where their youngest daughter, Myrtle was born. By 1905 the family had returned to New Zealand and living at Silverton road, Waihi.

From May to November 1912, the ongoing Waihi Miners Strike and its aftermath affected all who lived in the town and its environs. The Fugill family were no exception to this. George had a contract to cart coal from the railway wagons to the Grand Junction mine. Not long after the strike commenced, two union officials spoke to him and explained that if carting continued there might be trouble. George stopped the work but it meant that he could be liable for demurrage. It’s probable Francis was affected by the strike also, as the consequence of it meant little or no work was available and therefore a reduction in living standards.

On 4th August 1914 Francis was living at Silverton road with his family when Britain declared war on Germany. Seven days later, Francis Albert Fugill (12/350), single, battery hand employed by the Waihi Grand Junction Gold Mining Co, attested at Paeroa for the 6th Hauraki Regiment. His health was recorded as good. The first detachment of the 6th Hauraki Regiment were given a public farewell at Paeroa and F. Fugill was part of this detachment.

The government requisitioned ships from shipping companies to act as troops ships. Eight thousand five hundred men, horses, ammunition, equipment and supplies sailed in ten troop ships leaving from Wellington 16 October 1914 for Albany, Western Australia. Here they joined with the Australian fleet before continuing on to Egypt. As German war ships were known to be in the Pacific Ocean, a naval escort was provided by British and Japanese navies. Private Fugill was part of this contingent and possibly on HMNZ Transport No.12 S.S. Waimana, disembarking at Alexandria, 3rd December 1914.

Private Fugill’s WW1 record is complex and he had several misdemeanors and illnesses. On 13th February 1915, he was absent from parade and punished with five days CB (Confined Barracks). During May of that year, and at the Dardanelles, he was admitted with rheumatism to H M T Osmanish, then onto 15th General Hospital, Alexandria and Cairo before being invalided back home to New Zealand.

A large group of wounded and ill servicemen from Gallipoli arrived at Glasgow Wharf, Wellington during the afternoon of 15th July 1915 on the S.S. Willochra. Along with the wounded and ill servicemen, Frank Fugill was transferred to the ‘Red Cross Train’. The men were welcomed with blessings, thanks, gifts, flowers, food and cups of tea at stops along the main trunk line as they travelled north. The Waikato Times (13 July 1915) reported a civic reception given in Waihi to Private Fugill, where he was met on the platform by the Mayor, Mr Donaldson, and members of the Borough Council. Fugill was driven in a motor-car to the Seddon Memorial in the main street, where the public had assembled in large numbers to give a fitting reception, and welcome home. The report added that unfortunately Lieutenant Morpeth was unable to accompany Private Fugill, owing to a failure of a connecting train service. Fugill expected to convalesce at home or a convalescent home.

Between 31st August 1915 and 16 October 1916 Fugill is recorded as performing no military duties. In August 1916 the Department of Defence requested Police Headquarters arrest Private Francis Albert Fugill, in the employ of the Colonial Sugar Refinery, Fiji and returning to New Zealand in a month or two. His parents had refused to state his whereabouts. Detained when S.S. Victoria docked at Queen street Wharf, Auckland from Sydney, Fugill was charged with desertion and taken to the Water Police Station, before handover to military authorities. On 24th August 1916, at Trentham Camp, he was charged with deserting His Majesty’s Service. Fugill pleaded not guilty and was found not guilty as charged, but guilty of absence without leave and sentenced to seven days detention. In his written statement, Fugill explained he returned to New Zealand on the S.S. Willochra to Wellington and subsequently Waihi, where he reported to the medical officer for further treatment. He expected to receive orders that never arrived. At his own expense he visited the baths and replaced his missing teeth. Receiving nothing official and therefore no pay, he thought he was discharged and decided to find light work. Fugill added, he suffered considerably from rheumatism and as Fiji’s climate was warm and his health improved, he obtained employment there. Later he travelled to Australia to re-enlist but learnt he needed to go before a medical board. As he had done so in Cairo, he thought that was an end to medical boards.

As there was apparently no evidence of the rheumatics that sent Fugill home, he was deemed sufficiently recovered and therefore considered fit to return to active service. Private Fugill re-embarked in Wellington on 15 November 1916 on the Maunganui and disembarked Devonport (England) 29 January 1917 and marched to Sling. Sling, located on the Salisbury Plains, was the main New Zealand training camp in England throughout the war. Two days later he left for France and marched into camp at Etaples, finally joining 2nd Battalion Auckland Regiment in the field, 31st March 1917. Two months later he forfeited one days’ pay for an unrecorded reason.

On 9th June 1917 Fugill was wounded, gassed by an enemy shell at Messines and admitted to No.1 New Zealand General Hospital at Brockenhurst, Hampshire, then transferred to the New Zealand Convalescent Hospital at Hornchurch, Essex. Fugill’s next transfer, on 14th April 1918, was to Codford Depot where he found himself again before the medical board and declared unfit for further service. 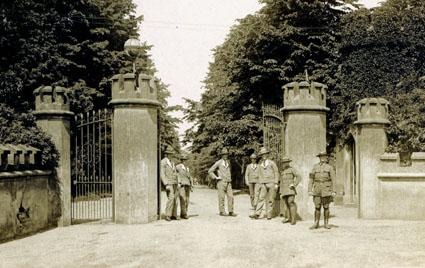 If wounded or invalided soldiers were considered sufficiently recovered to leave Hornchurch they were sent to Codford Depot, Salisbury Plains in preparation for return to active duty. Some men who did not pass the criteria were considered unfit for further active service and returned invalided to New Zealand.

The invalided, Private Fugill embarked for New Zealand on H.M.T. Paparoa leaving 8th August 1918. In 1920 the army recorded his address as C/O Athenree Post Office via Waihi. The 1923 and 1926 Wises NZ Post Office Directories state his occupation as farmer and living in Waihi.

Francis Albert Fugill (occupation, iron worker) married Alice Violet Brown in 1925. They lived at 3 Rendel Place, Mt Eden, Auckland. Their daughter Betty Caroline was born 1926. On 5th February 1927, Caroline died aged 9 months at the residence of her maternal grandparents. The same year his father died. Francis and Alice separated early 1927 and subsequently divorced. Also in February 1927, the Auckland Star personal column noted, Fugill of 7 O’Neill street, Ponsonby, Auckland, advertising that he would not be responsible for debts contracted in his name.

The last known ‘sighting’ of Francis Albert Fugill in New Zealand appears to be 1928. To date his death and place of death are unknown but likely to be away from New Zealand and after 1949 when his mother died.