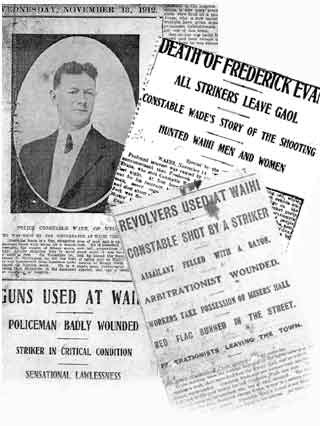 The most tragic events since the commencement of the strike were enacted this morning, completely out rivalling the sensational events of yesterday morning. At the moment of telegraphing, the arbitrationists are in complete control of the town, and are engaged in locating strikers who are hidden away. They have captured the Miners’ Union Hall, driving the strikers therein to the four winds of heaven. Constable Wade, of Wellington, was shot in the stomach, and a worker was shot in the legs. The police are busily engaged in rescuing strikers who have taken refuge in various houses, rushing in and imploring the inmates to save them.

Start of the trouble

The trouble started about 7.30 when the workers disembarked from various brakes in Rosement road, formed up in procession, and entered the town, taking both sides of the street en route to the mines. In the meantime a knot of strikers and a few men had assembled outside the Miners’ Union Hall, and notwithstanding the grim lesson of yesterday and a subsequent warning by the Commissioner of Police, they jeered at passing workers, one picket calling them “A lousy lot.”

That proved the last straw, and a rush was immediately made to the office entrance, where the strikers were standing. One of the pickets immediately slammed the door, and as the first onslaught of the workers struck against this he pulled it a little open and fired two shots, then slammed the door. When the smoke cleared away it was found that a young fellow named Johnson had been struck in the leg with a bullet. It was only the work of a moment when the enraged workers burst the door open, carrying everything before them in a mad rush.

The police by this time were amongst them. Two more shots were fired at the back of the building, Constable Wade, of Wellington, receiving a bullet in the pit of the stomach. He immediately batoned his assailant, a picket named Frederick Evans, and then collapsed. Luckily the bullet did not enter the constable’s stomach direct, but glanced somewhat, thus probably saving his life. He was carried out and conveyed to the hospital. Evans’s condition is now very precarious. Other shots were fired by a picket named G. Jones, who is now under arrest. The workers have given some of the most prominent federationists a warning to get out of town.

One striker was badly handled by the crowd and took refuge in a butcher’s shop, where he was rescued by the police.

The caption below the photograph reads:

Wednesday November 13 1912
Police Constable Wade, of Wellington, who was shot in the disturbance at Waihi yesterday morning. Constable Wade is a fine, strapping type of man, and is exceedingly popular amongst those with whom he is acquainted. He is possessed of great physical strength, his weight of fifteen stone, and tall proportions (he is about 6 ft high) always standing him in good stead when it was necessary for him to quell a row. On November 1st, 1908, he joined the force, and was stationed in Wellington up till the time of being sent to Waihi. Last August he was transferred from Lambton quay station to Mount Cook, where he was placed on inquiry work. He is a single man, twenty-seven years of age, comes from Pukekohe, in the Auckland district, and has a brother stationed as constable at Kawhia.

Profound interest was caused by the announcement that Frederick George Evans, who shot Constable Wade, died last night. At first hopes were held out for his recovery, but he gradually sank, never regaining consciousness, and died about eleven p.m. The Union Jack was flown at half-mast over the Miners’ Union Hall this morning.

Evans was said to have been an engine-driver, and came from Australia. He was about thirty years of age, and leaves a wife and a young family.

Mr Wallnutt, coroner, is holding an inquest this afternoon. two doctors will make a post-mortem examination after the body has been viewed by the jury.

According to latest inquiries at the hospital Constable Wade is progressing very favourably. This morning he was able to sit up and read a newspaper.

Interviewed this morning, Constable Wade, who is still very weak but in good spirits, said that when the crowd got opposite the office door of the Miners’ Union Hall some workers and strikers were having hot words. A rush was made towards the door. He heard a shot fired and then immediately ran into the passage-way., at the same time telling the foremost of the workers to stand back.

Constable Wade rushed through towards the folding doors, from which he saw Evans fire. Being under the impression that the shot was fired direct at him, Constable Wade chased Evans out the back onto a vacant allotment, and was gaining fast on the fugitive when the latter swung right round and fired point-blank, the bullet striking the constable in the abdomen.

The constable continued the chase, and drawing his baton before Evans could start off again, struck him on the head, Evans falling flat on his face; then the crowd took charge.

After viewing the body, evidence of identification was given by Albert Goldsmith, who said he had known the deceased for about sixteen years. Deceased had said he was a member of the Waihi Miners’ Union, and was one of the strike pickets. Evans was thirty-one years of age, and was born at Ballarat (Victoria). His wife and two young children live in Waihi.

At the request of Inspector Wright the inquest was adjourned until Tuesday next.

In the years prior to 1907, when the Miners’ Union affiliated with the Federation of Labour, relations between employees and the mining company were reasonably amicable. But the increasingly large staff became more distant , with the management controlled by a Board of Directors in England. In 1911 the Miners’ Union deregistered itself from the Arbitration System and was so legally able to strike. With the help of the Federation of Labour and their first non-working Secretary, Mr W A Parry, they won some concessions from the mining company, particularly relating to the long-disputed contracting system. Also in 1911 the mining company became aware that the ore body had definite limits in both quality and quantity. The first reduction in ore processing occurred - from about 460,000 tons in 1910 to just over 380,000 tons in 1911.

Members of the Engine Drivers’ Union were not in favour of what they considered were the extreme demands of the ‘Red’ Federation. They ignored an order from the Miners’ Union to break away from the Arbitration System. tension between the Unions grew, resulting in the miners refusing to be lowered to their workplace by what they considered were unco-operative engine drivers. The Strike began on May 12 1912. There was the suspicion that the Drivers’ Union had the support of Mine Management. This was denied by the mine, who stated that the cause of the problem was purely union rivalry.

Evidence given at the inquest on the death of Frederick George Evans stated that during a confrontation at the door of the Miners’ Union Hall a shot was fired by Evans, who then fled out the back door, chased by Constable Wade and some non strikers. Evans allegedly turned and fired a shot which hit Constable Wade in the stomach, and was then clubbed over the head by Wade. Federation witnesses claimed that the shot was fired only after Evans had been clubbed, and that it came - not from Evans - but from the ranks of the ‘scabs’ (strike breakers).

The unconscious Evans was taken to Waihi Police Station, and on showing no signs of regaining consciousness was admitted to Waihi Hospital where he died the following evening, November 13 1912.

Constable Wade’s condition was at first reported to be serious. He improved and after some days was discharged. Doctors reported that the bullet had been deflected and had lodged in a muscle near the spine. It was not removed.

Evans’ body was taken to Auckland and was buried on Sunday November 17 after a procession of some 3,000 mourners proceeded from Quay Street to Wakaraka Cemetery.

Bitterness and confrontation increased, but eventually a new Union was formed under the Arbitration Act. This happened only after a 50-strong police contingent was sent to Waihi by the anti-Federation Massey Government to protect the ‘scabs’ and assist them through picket lines. Some of the strikers, on what today would be considered unlawful reasons, were sent to Mount Eden Jail in Auckland. Some 68 were sent in total, for up to seven weeks. Many others were driven out of town. This started an exodus of miners and their families. Acts of violence continued until the strike ended, six months after it began, on November 29 1912.

People in Waihi during the 1912 Miners’ Strike

Index of people in Waihi during the 1912 Miners Strike

Time book entries for the pay period ending June 8th 1912 when over 300 miners were listed. The last the miners worked was 13th May 1912…

PLEASE NOTE: We have noticed when viewing in some web browsers, the PDF files initially appear with blank pages. If this is the case, please download to view or try reloading the page.