Union Hill can be seen on the right as travelling in to Waihi along State Highway 2 from Tauranga. Dug into the hill are 10 in-ground ore-roasting kilns, the historic 110-year-old remnants of 13 recorded kilns, and part of a series of similar structures found throughout the Hauraki goldfield which extends north towards the Coromandel.

Ore-roasting kilns, also known as ‘calcining’ and sometimes ‘burning’ kilns were constructed in the late 1880s to heat gold-bearing ore and aid in the recovery of gold.

The practice is over 2000 years old, and is recorded in Ancient Egypt and the Roman Empire. Construction and operation of the in-ground kilns has changed little in that time.

Gold-bearing ore and firewood are loaded into the kiln from the top. The firewood is set alight. Later the ore is removed from the bottom of the kiln and more fresh ore and firewood added at the top. The aim is to ‘roast’ the gold-bearing ore by slowly burning the wood. Too hot and the gold is less accessible than before the operation, not enough heat and the process fails to work. Roasted gold-bearing ore becomes more friable and so crushes more readily. This reduces wear and tear on crushing machines and improves the recovery rate. In addition the heating process oxidizes sulphides present on the rock which would otherwise hinder the separation and subsequent amalgamation of gold particles. 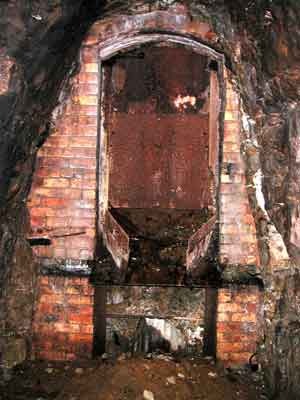 Photo: Inside the tunnel at the base of one of the ore-roasting kilns at Union Hill, Waihi. The shute through which the roasted ore was extracted can be clearly seen. It would be hauled away along a tunnel in trucks before a fresh charge of wet ore and firewood was added from the top of the kiln.

Experiments at Karangahake showed that miners could expect 33% gold and 95% silver to be ‘left in stone’ using the traditional crushing and amalgamation methods. Roasting and amalgamation in the presence of cyanide of potassium resulted in 10% gold and 40% silver lost. A distinct improvement.

Eight companies on the Hauraki goldfield adopted the practice of kiln roasting. The ore types found on the Coromandel made the process worthwhile. Similar kilns were to be found in California and in Victoria, although these had ceased to operate some years earlier.

The Union Gold Mining Company (later acquired by the Waihi Gold Mining Company) operated 13 kilns on Union Hill from 1889 to 1901. Similar kilns were built at the Woodstock-Talisman in the Karangahake Gorge, the Silverton in Waihi the Victoria at Waikino, the Jubilee, Golden Cross and Waitekauri in the Waitekauri Valley, the St. Hippo in the Maratoto Valley and the Kapai-Vermont in the Kuaotunu Valley.

The remaining kilns at Union Hill are 6.7m-8m in diameter and 8m-8.5m deep. An 1894 report of the Mines Inspector details the construction and operation of the Union Hill kilns.

‘They were made in the shape of an inverted cone, having a hole at the bottom, from which the ore was drawn out when dried, and the kiln emptied for another charge.’

The report continued to explain that the largest kilns were capable of holding up to 100 tons of ore. The ore was first dried in open kilns

‘tapering down to the bottom, where they are finished with a brick arch, have a door and an iron chute for discharging the dried ore into trucks. These kilns are first charged with wood and ore in layers, each layer being about 5 feet apart. After the kiln is fully charged the wood is lighted, and after all being burnt up, about one half of the charge is withdrawn - 50 tons - and a similar quantity of wet ore and firewood added on to the top of the charge.’

In this way the kilns were never allowed to cool down and there was always sufficient heat to ignite the firewood which was added and mixed with the new charge. This method of drying the ore was much more efficient because there was not a large body of cold material to heat up as was the case with smaller kilns which were completely emptied at each charge. At Union Hill each batch of 50 tons of ore was roasted for about six days. It is estimated that one ton of firewood was required for every two tons of ore to be roasted. The firewood requirement was obviously considerable. 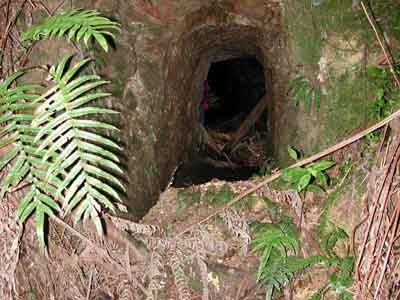 Photo: A view of one of the tunnels which gave access to the bottom of the kilns and allowed the roasted ore to be removed. 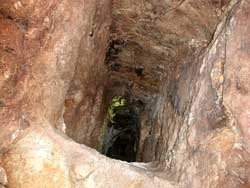 Photo: A junction of two kiln tunnels. This area would have been closed in during the years the kilns operated. 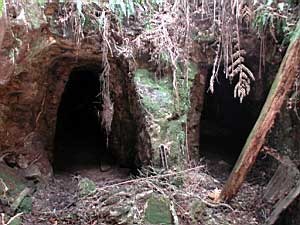 Photo: A ventilation shaft for the kilns.

Ore-roasting on the Hauraki goldfield lasted no more than seven years in most cases. New technology - the adoption of the wet-crushing method in the mid-to-late 1890s meant roasting was no longer needed. In addition the ever-increasing cost of fuel as local supplies were exhausted was also a factor, coupled with the growing appreciation that handling of dusty kiln-dried ore was a major health hazard and a significant contributor to silicosis - the miners’ ‘coughing disease’. It was also determined that residual charcoal deposited in roasted ore tended to absorb expensive cyanide solution used in the subsequent gold extraction process.

In their academic report on ore-roasting kilns of the Hauraki goldfield, Moore and Richie conclude:

Even if wet crushing and the cyanide process had not been adopted, wood-fired ore-roasting could only have been a short-term and increasingly expensive measure because the source of the fuel for the kilns, the forests in the vicinity, were being consumed at an unsustainable rate (coal was not available as an alternative fuel until a railway was constructed to the mines in 1905). Regardless of its efficiency as a treatment, ore-roasting had devastating long-term effects on the environment around the mines as evidenced by this statement to the 1910 Royal Commission into the silting and flooding of the Waihou-Ohinemuri river system. The Waihi G.M.C. metallurgist stated: ‘[We used] hundreds of thousands of tons of firewood when we were dry-crushing [and roasting]’. The loss of the bush had serious ramifications. ‘We find the effect on our water power is this: A good rainfall in the old days would give us several weeks of plenty of water, now it dies out in less than a week’. So, beyond the general environmental degradation caused by the destruction of the forests by the major mining companies involved in roasting, its effects came back to haunt them long after they had ceased the practice and turned to more efficient methods of treating the ore.

Adapted in part from: