Working conditions for miners nearly a hundred years ago were not easy, as this extract from The Maoriland Worker of 1911 illustrates. 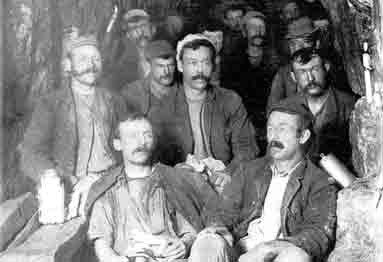 It will be remembered that the Government passed a bill last session imposing a duty of 3d, three pence per ounce on all gold produced in the Dominion, and the bill provides that the whole of the proceeds of the said gold duty to be paid into a fund to be known as the ‘Gold Miners Relief Fund.’ The following regulations, showing how the fund is to be administered will be of interest.

1. The public trustee shall, on receipt of a certificate from a duty qualified medical officer, and also on the certificate from an Inspector of Mines apply the moneys deposited to the credit of the Gold-miners Relief fund as follows:-

(a) When any Gold-Miner has been injured while working, and is off work for one-week or more, he shall be he shall receive the sum of 12s shillings and 6d six pence per week, or at the rate of 2s two shillings and 1d one penny for every working day, from the date of the injury, which payment shall, subject as hereinafter provided, continue so long as such medical officer and Inspector of Mines certify that such gold miner is unable to work; but when in injury occurs in any mine situate in a locality remote from a settlement, where the services of a medical officer are not procurable payment, at the prescribed rate may be made for any period not exceeding 30 days from the date of the injury on the certificate of the Inspector of Mines alone. In cases where any gold minor is permanently disabled, he may be granted a fixed sum (not exceeding £50 pounds) in satisfaction of all claims, but in any case such case the certificate of a duly qualified medical officer and an Inspector of Mines will be required. No gold miner shall be entitled to any payment in any case unless he has been so injured as to prevent him working for a period of not less than one-week and the total amount payable to any gold miner shall be shall and no case exceed £50 pounds.

(b) If any gold miner meets with an injury which proves fatal the nearest relative of such gold miner might be granted a sum (not exceeding £10 pounds) towards the defraying the funeral expenses of the deceased miner and an additional sum (not exceeding £15 pounds) may be granted to the widow or other near relative of such deceased miner in full satisfaction of all claims.

2. A gold miner who meets with an injury which disables him from work shall send, or cause to be sent within seven days of such injury a notice in writing to the Inspector of Mines and all applications for relief must be made within 14 days of the date of the inquiry or the claim cannot be entertained.

4. Any gold miner who becomes incapacitated by miners phthisis (pneumonoconiosis) from the following his calling as a gold miner, shall be entitled to payment in accordance with those regulations: Provided that the gold miner shall not be so entitled unless he has been resident New Zealand before at least three years before the incapacity arises.

5. In these regulations “Gold Miner” and “miner” mean gold miners who are actually and regularly employed or engaged in gold mining, and who derive their livelihood from such calling, but do not include persons who merely workers gold miners occasionally”.

6. Injury means personal injury by accident arising out of and in the course of the employment or occupation of a gold miner and includes miners phthisis (pneumonoconiosis).

8. Clause 10, of the Workers Compensation Act, 1908 which brought miners complaint (pneumonoconiosis) under the heading of an accident has been the erased from the statute book because, we were told it was unworkable, Clause 10 should never have been repealed. What the Government should have done was not to strike the cause out, but let it remain and introduce the necessary machinery for its efficient working. However, it was thrown out and the quartz miner lost something that he had been fighting for years, and in its place as a sop to keep him quiet comes the ‘Gold Miners Relief Fund’.

This material was compiled by Don Lockwood of the Waihi Gold Mining Museum & Arts Centre from original newspaper reports held by the Museum.